Kojo Rigault ‘Ghetto Girl’ ft R33MZ
Listen to 'Ghetto Girl' on YouTube
No. 9 in Music Week Urban Charts with ‘Loved Up’
No. 4 Single in the European Music Video Charts
Best Caribbean R&B Group Award
‘This is the future sound of Reggae’’ Music Week
‘Will have you on your feet for sure’  Sample Face
‘Totally fresh sound’ Music News 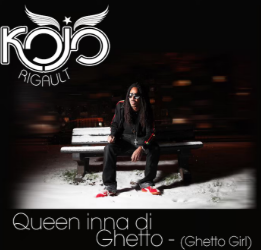 Trinidad and Tobago-born, London-based reggae pop singer Kojo Rigault is set to release the Reggae song of the summer, ‘Ghetto Girl’. The track features an irresistible baseline that is surefire catch on for DJ’s to drop on the dance floor. The song follows the same formula of Reggae/R&B/dancehall mix and tells the story of a Ghetto Queen who looks after her man with the type of love that’s so strong no uptown, high street girl with ‘bling’ could ever waver his attention. This remix features a collaboration with upcoming Brooklyn NY Rapper R33MZ and the track is produced by Legendary Reggae producer Livingston Brown, a well-known producer for Maxi Priest, Barrington Levy and some of dancehall’s greatest hits including Maxi’s ‘Closer To You’.
Kojo’s music story began at an early age when he formed a Boys II Men inspired boy band with his childhood friends called New Creation. The group became an overnight sensation after their appearance on Trinidadian TV show Party Time with their acappella renditions of Boys II Men classics like ‘End of The Road’ and ‘So Hard To Say Goodbye’. The group gained the attention of Eddy Grant, which led to the recording of their first album ‘Spirits of Gold’. The group earned the position of number 4 single in the European music video charts and broke into the UK Top 40, winning a best Caribbean R&B group award and scoring a place in Trinidad & Tobago’s history as one of the country’s best-known pop groups.
It is clear ‘Ghetto Girl’ follows a history of success for Kojo. In the time since his days with New Creation, he has worked with Craig David’s producer Mark Hill, head of A&R at Jetstar, Dee Leng, and most recently, dance producer/remixer K Warren. This collaboration resulted in ‘Loved Up,’ the first single from his album that earned a spot in the top ten Music Week chart entry and 7 weeks in the Urban charts. Stay up to date on Kojo’s rise to the top by checking his social media for the latest updates.
Website | Facebook | SoundCloud | Twitter | YouTube | Spotify | EPK