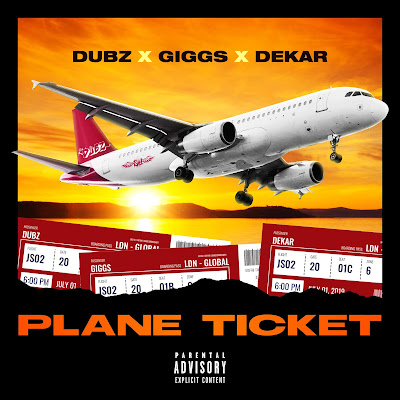 Plane Ticket is the long awaited party anthem from one of the most talented pioneers in rap, Dubz. The instantly addictive hook (produced by Machine Baby) features rising star Dekar and global phenomenon Giggs. The release features a video by Jordz Visuals who has worked with some of the best known artists in the urban scene. Dubz says “this track is one of many from Giggs and I, but it’s the first of its kind... we have never made a party song but when I heard the beat I knew it was the one.”
Dubz launched his solo project Ard Doe in 2009, winning him instant recognition with key brands such as SB:TV, Link Up TV, GRM Daily,  MTV, 1xtra, Capital Xtra and Kiss. In 2017, he took to the stage with Giggs, performing on the Landlord European Tour and at Reading and Leeds Festival, where the two tore rooves down with their crowd killing track Pain is the Essence. Dubz has collaborated with grime royalty including Skepta and Krept & Konan, but has more recently been working on his second solo body of work Proper, due for release later this year. The project featuring Young Teflon, Ghetts, Wretch 32, Giggs and Fekky to name but a few.
Keep checking Dubz’s insta for news on forthcoming releases and tour dates.
Follow Dubz on Instagram